The stained glass windows were part of a series of gifts made to the Church in the period 1929-1933 by Lord Blanesburgh, then resident in the Town at Greyfriars. 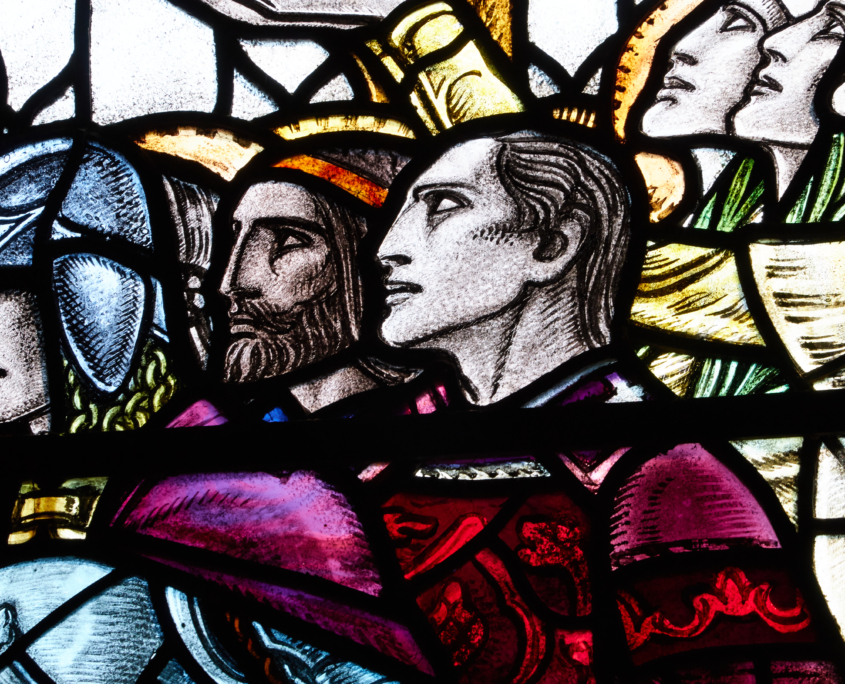 The theme of the central east window is Praise and Resurrection.

The central composition shows Christ enthroned, surrounded by the elders, while below, Michael, the symbol of courage, backed by the Angel of the Vials and Seals, overthrows Lucifer. Above, figures of the four elements support discs bearing the signs of the zodiac. Across the centre of the window are figures representing the Virgin and 12 saints, including St Thomas of Canterbury, who bears a model of Winchelsea Church. The tracery represents the nine choirs of angels.

The theme of the left-hand east window is Birth. The central composition represents the Adoration of the Magi and the Shepherds, above it the Holy Innocents and below it the Annunciation. To the left are Moses and Joshua with the Ark of the Covenant and to the right are David and Isiah. The tracery contains symbols of the theological virtues of faith, hope and charity and the cardinal virtues of justice, prudence, temperance and fortitude.

The theme of the right-hand east window is Death and Resurrection. The central composition represents the crucifixion, with the Last Supper below. To the left is the baptism of Christ and to the right, Christ appearing to Mary in the Garden. The tracery is based on the vine and shows the Seven Gifts of the Spirit, symbolised by doves.

Completing the east end, the two windows on either side of the Chancel are of Victorian origin and the very small glass, high above the central window, may contain medieval glass. 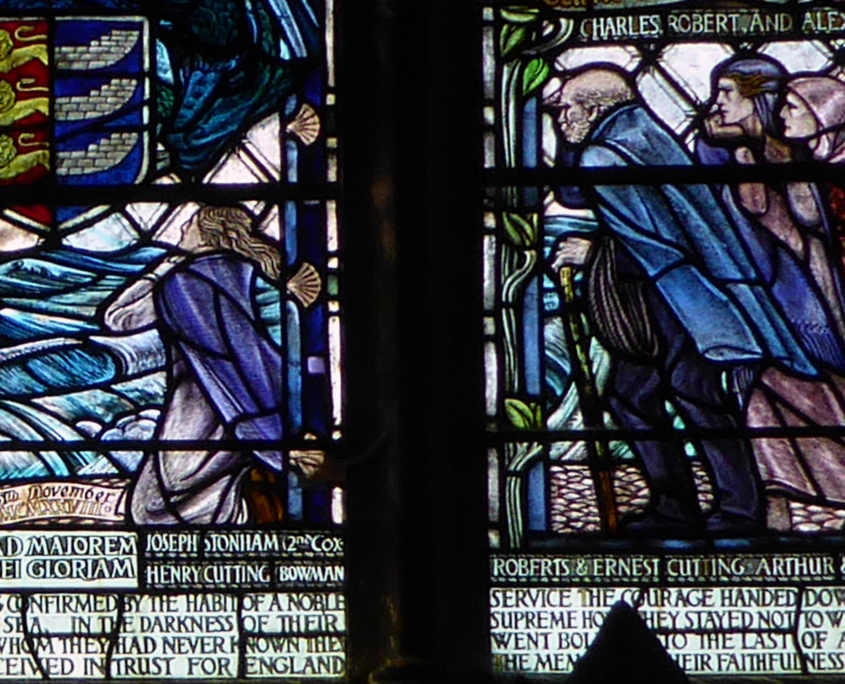 The theme of the left hand window is Christ as the Bestower of Peace.

The central composition shows Christ stilling the tempest, with St Nicholas, patron saint of sailors and children, to the left and, to the right, the landing of St Augustine, the first Archbishop of Canterbury. Above are the pelican and the phoenix, symbols of self-sacrifice and resurrection. Below, and most famously, is the depiction of the Mary Stanford lifeboat disaster, which occurred on 15 November 1928, with the loss of the entire crew. Their names are recorded on the window. This was the first Strachan window to be completed and it was unveiled in July 1929.

The theme of the central window is Christ as Healer. The central composition depicts Christ at the Pool of Siloam, with the Seal of Winchelsea below. To the left is the conversion of St Paul, with the vision of Christ above and the parable of the sower below. To the right is St Giles with the hind, with the reaper below. The tracery contains the Ark, as the symbol of the Church.

High up on the west wall is a small window glazed in plain glass. This allows a beam of sunlight into the Church and gives some impression of how the Church would have been without its present stained glass.

The six windows previously described, along with the organ were dedicated on 9 May 1931 by the Archbishop of Canterbury, Dr Cosmo Lang, in a memorable service, the musical part being led by the organist and choir of the Temple Church. 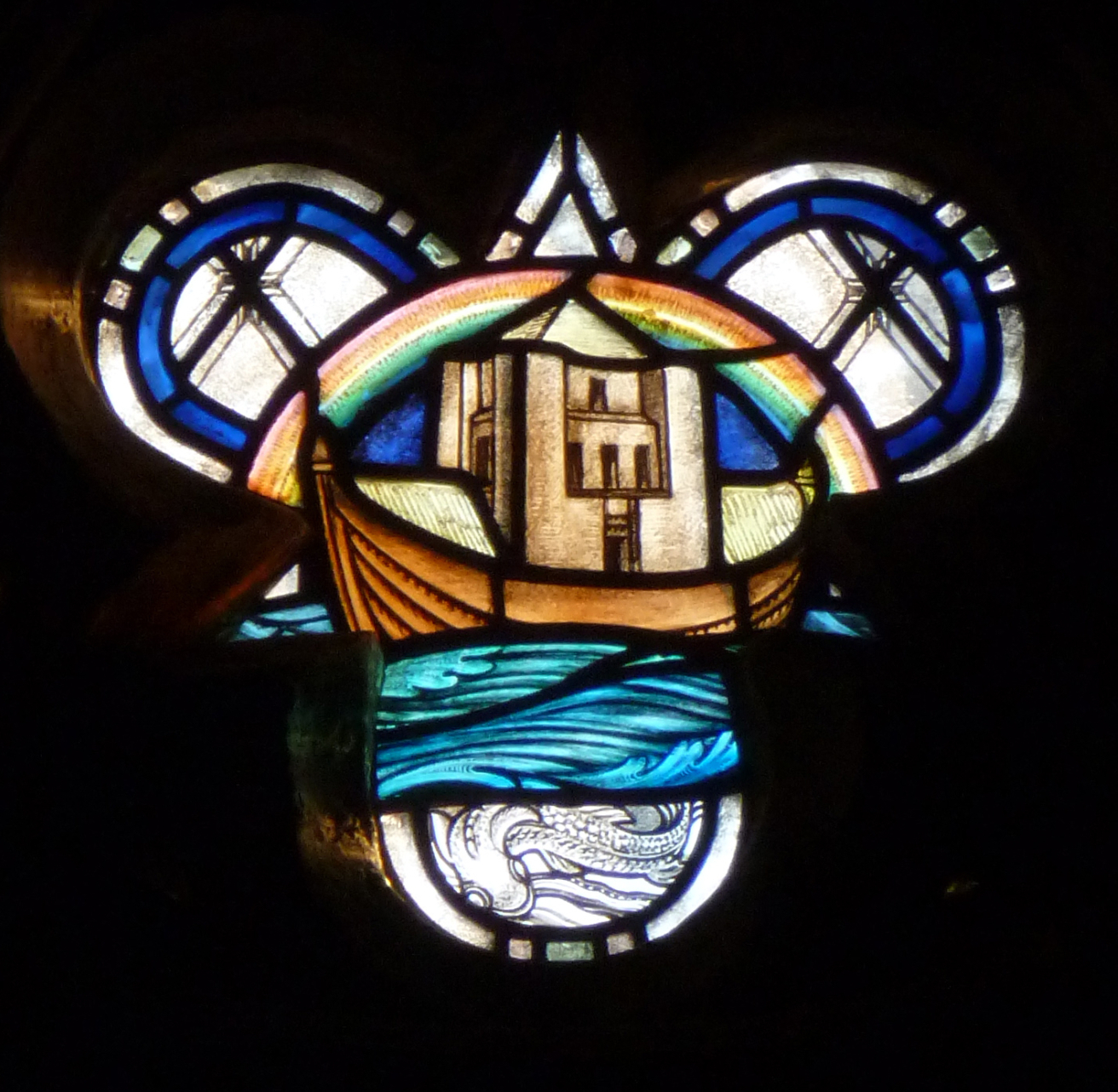 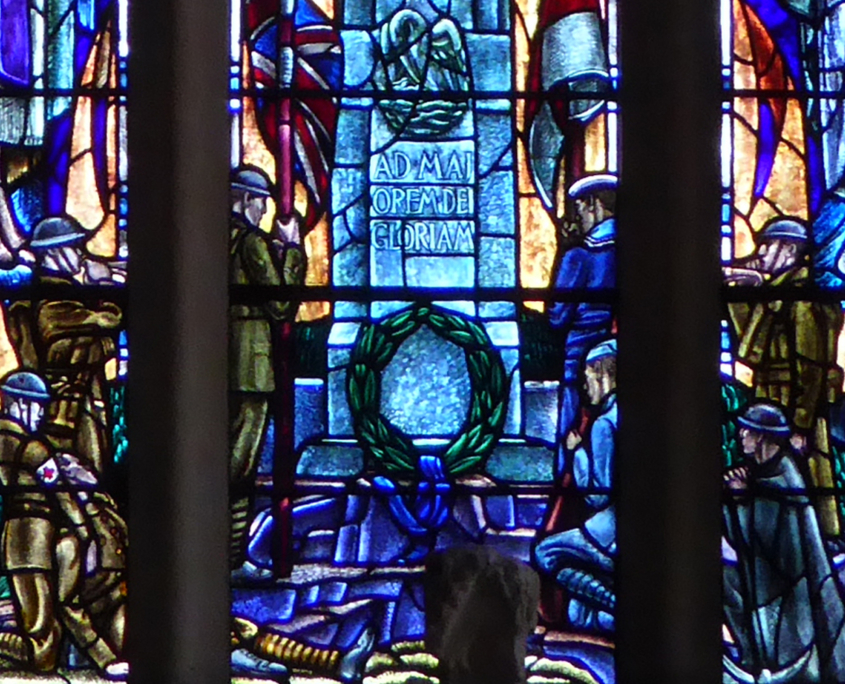 Taken together, these three windows represent the elements of earth, air and water, thus, in the context of the War Memorial being a testament to the men whose operations were carried out on the land, sea and in the air.

They are the most detailed and complex of Strachan’s windows in the church. These and the altar were again dedicated by Archbishop Lang, this time on 21 October 1933, the service being broadcast by the BBC.

The theme of the central window is Air and Fire and has particular significance as a war memorial, the central composition being a cenotaph, supported by the shadowy figures of Fortitude, Faith, Love and Justice, being the qualities of the men remembered. Above is the symbol of the Trinity and six spheres representing the days of creation. Below is a depiction of a Belgian village in wartime.

The theme of the left-hand window, which was filled with rubble prior to this window being created, is Land. The central composition is the first death, with Adam standing over the body of his dead son. To the left violence is symbolised by a conqueror attended by captives in chains. To the right, by contrast, peace is symbolised by a man at an altar in a wild landscape, awed by the eclipse of the sun. Below are three panels; on the left St Leonard choosing his hermitage; in the centre, monks bring stone effigies to the new church from old Winchelsea; on the right Edward I receives plans of the new church.

The theme of the right-hand window is Sea. The central composition is the mystery of the ocean as the source of all life, with a coiling monster held in check by angel forms, typifying the conflict of good and evil and hinting at the origins of war. Below is a vision of the Winchelsea of old, with the sea at its base and ships sailing close to the walls. 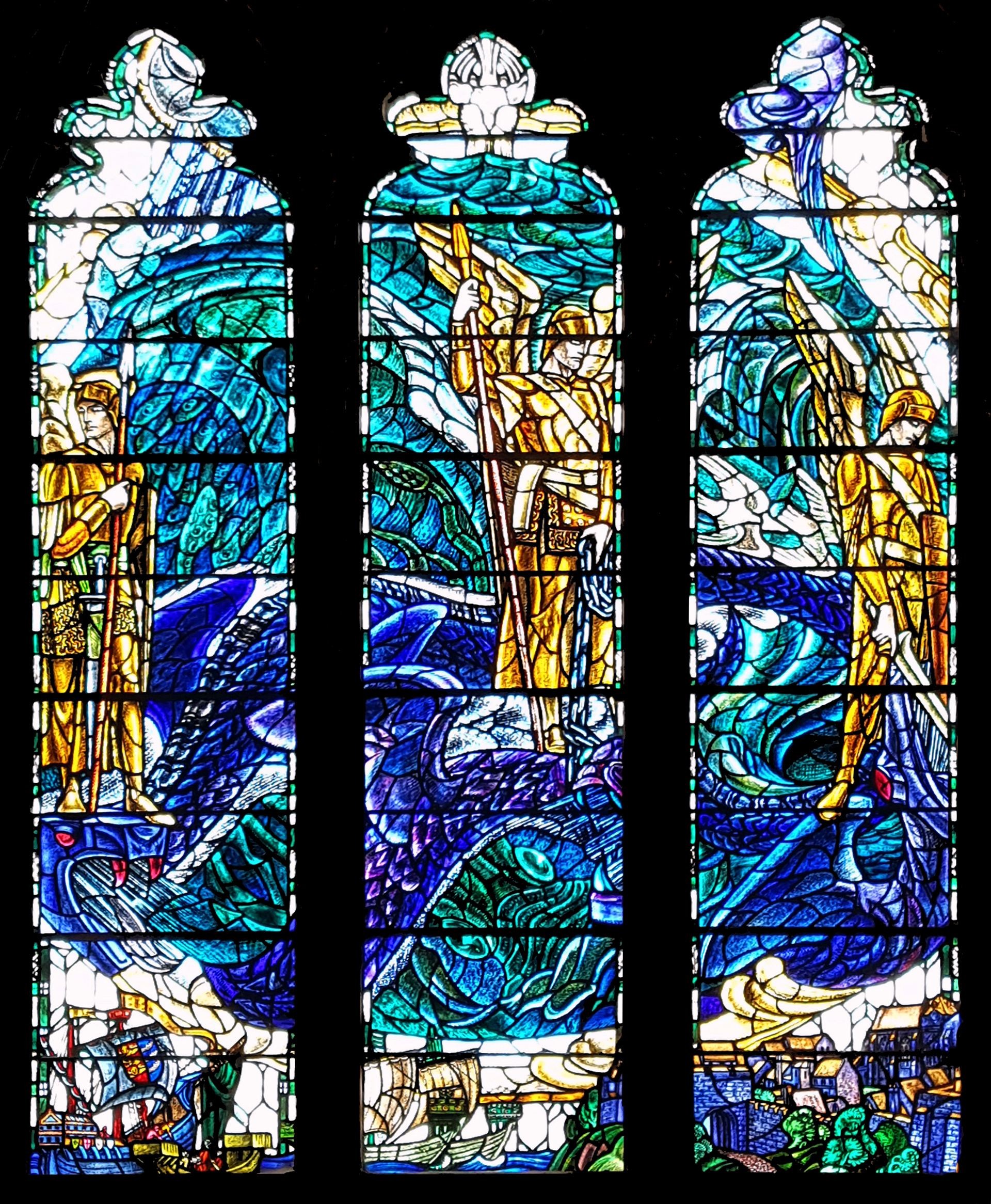 These gifts were made in two parts.

First the six windows on the east and south sides, the organ and the inner and outer oak doors to the Church, are collectively known as the Younger Memorial. This was given in memory of his brothers George and William, who had died in 1929 and 1925 respectively and the sons of the former, Edward, killed in the Boer War in 1901 and Charles, killed in France in 1917. This is inscribed in Latin on the organ casing.

Second the three windows on the north front and the altar, in the Lady Chapel, are collectively known as the War Memorial.

Robert Younger, Baron Blanesburgh GBE, PC, QC was a Scottish barrister and judge. The son of James Younger and Janet McEwan, and younger brother of the 1st Viscount Younger of Leckie, he was educated at Edinburgh Academy and Balliol College, Oxford, where he graduated with a Bachelor of Arts in 1883, and a Master of Arts in 1909.

On 12 October 1923, he was appointed Lord of Appeal in Ordinary and was created a life peer with the title Baron Blanesburgh, of Alloa in the County of Clackmannanshire. Having been knighted on 20 April 1915, he was made a Knight Grand Cross of the Order of the British Empire in 1917.

The windows were designed and created by Douglas Strachan, born in Aberdeen in 1875, who established reputation as a portrait artist and illustrator, before turning to work in stained glass. His reputation was established when he won the competition to deliver the British contribution to the Palace of Peace in The Hague, completed in 1913 and he would certainly have been known, by reputation at least, to Lord Blanesburgh. After the war, he received many commissions related to war memorials, including the Scottish War Memorial windows at Edinburgh Castle. He first visited Winchelsea during a family holiday in the area in 1928, when the windows in the Church were largely of plain glass and, shortly thereafter, received Lord Blanesburgh’s commission. It is arguably the best and most complete collection of Strachan’s work. 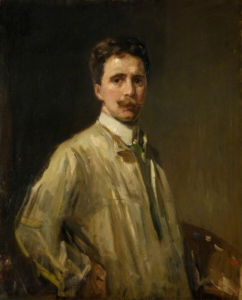